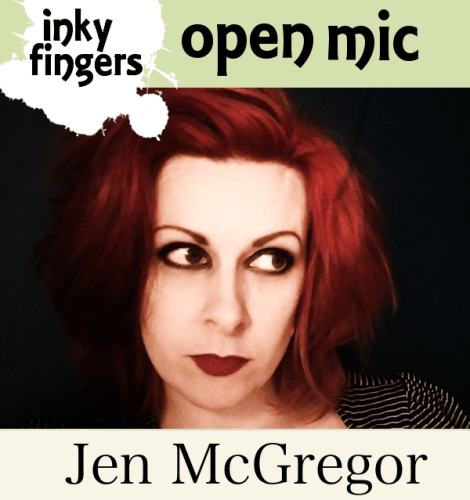 After Hidden Door glory with three features in one night, Inky Fingers is back at Monkey Barrel Comedy for the June open mic. Join Inky for a feast of spoken word with the savant of the short story, Jen McGregor.

Jen McGregor is an Edinburgh-dwelling Dundonian raised by Glaswegians. She won the Scottish heat of the Great British Write Off and was a finalist in the SMHAFF Writing Awards. Her plays have appeared at the Piccolo Theatre of Milan, the Traverse, and the Festival Castel dei Mondi. She has been published by New Writing Scotland, Bare Fiction, and 404 Ink, most recently in their smash hit anthology Nasty Women. Her Twitter is @jenbitespeople.

We also want YOU!

We want your stories, poems, rants, lists, epic fantasy trilogies set in space, you name it. We’ve had a good number of sign ups so far so hurry and secure a five minute open mic spot. Email us at inkyfingersedinburgh@gmail.com. Join us for a night of poetry, stories, and fun! And a raffle!

We do words and performance. Fantastic live events, open platforms, writers' groups, workshops and all sorts of special things. We believe in putting beautiful words in a beautiful order, and in many kinds of beautiful. Join in.